Image credit: http://astro-pi.org/
What is an Astro Pi?

The Astro Pi is a Raspberry Pi computer with a special add-on board full of sensors, a camera and LED display. It's perfect for space science and learning about programming.

What makes the Astro Pi so special is the Hardware Attached on Top board, called HAT for short. This board, as the name suggests, is attached on top of the Raspberry Pi computer via the 40 General Purpose Input Output (GPIO) pins which provide the data and power interface. This board has several integrated-circuit based sensors that can be used for many different types of experiments, applications, and even games.
Features: 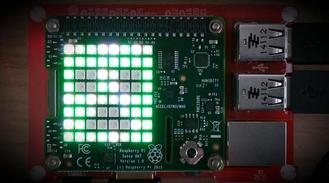 Some useful resources for getting started: