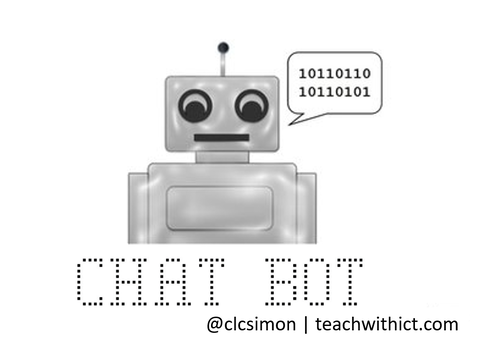 This tutorial is based on the work of Carrie Anne Philbin for the Raspberry Pi Foundation and is licenced under the Creative Commons Attribution 4.0 International License. (See credits below)

The Turing Test was based on a Victorian parlour game in which a judge (or interrogator) asks a series of questions to a man and a woman in a separate room. By reading a series of typed answers, the judge must determine which replies were from the man and which were from the woman.

For years, science fiction writers and filmmakers have dreamed about robots that can think for themselves however, despite giant leaps in technology, this dream is still far from reality. To explore the reasons why it is so difficult to make a thinking robot, we are going to create our own chatting robot (chat bot) in Python.
Use the window (above) to test your code.
STEP 1 - Creating a chat bot
​
In order for the chat bot to work, you will need to import the time and random libraries.
​Next, we need to ask the user a question and store the response in a variable. Add the following:
​Next, we want to give the user the impression that they are chatting to a real person, therefore, we need to place a pause in-between each new question / response. To do this, we will use the time `time.sleep()`. Enter the following:
​Next, we need to create a response from the computer. We want the reply to sound personalised so we are going to add the users name to the end of the response. To do this, we will use the concatenation `+` command. Add the following code to their script:
Next we are going to ask the user how they are feeling. We will store this in a variable called 'feeling'. Add the following:
Next, we are need to create a response. In order for the computer to appear human, we need to have a set of different responses. To do this, we will use an `if` statement. We will start with the response for 'if' the user is feeling "good". Add the following:
So far, there is very little variation in our answers. In order to make our chat bot appear more human, we are going to add a list of random possible answers.
​First, add an input() asking the user to enter their favourite colour (remembering to add a natural pause):
Next, create a list of possible responses:
Finally, add a response by choosing a colour from the list at random:
Your finished code should look like this:
STEP 2 - Improving your chat bot