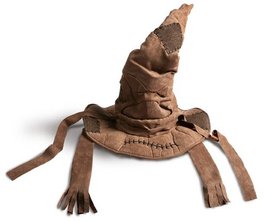 In this lesson, students will create a Raspberry Pi powered Harry Potter style sorting hat. Students will also learn how to connect a physical button to the Pibrella and program it to control the sorting hat.

Note: Although I have written this as a lesson, it would probably work better as a project for a small group / after-school club.

What you will need (For each group of students):

* This lesson assumes that students already have some experience of using the Raspberry Pi and that they have already installed the NOOBS Operating System. To find out how, click here
** Most D&T departments will have some of these lying around and may let you borrow them if you ask nicely (I find taking a box of sweets usually helps!)
*** Obviously, you will also need a hat. Here are some ideas to get you started:

Setting up the Pi:

1. First, students must attach their Pibrella to the Raspberry Pi (See instructions here: Setting up your Pibrella)

2. Next, students will need to connect their push button / switch to their Pibrella.

Connect the push button / switch using two jumper cables.
Important! Make sure you connect the leads to Input A (See below) 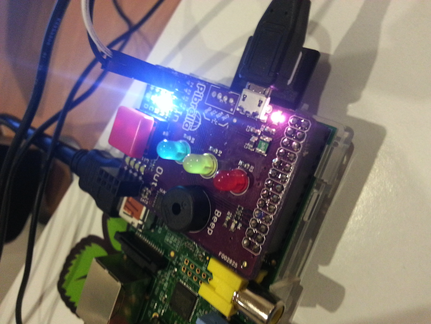 Tip: You can connect the switch directly to the Pibrella using a couple of paperclips (See image below)

At the command prompt type the following:

In order to create the sorting hat, students will need to install some additional library packages required for Python:

Start by launching LXTerminal to start a command line:

Students will need to install the following libraries in order for the sorting hat to work:

To upgrade the operating system:

Next, students must install the Pibrella library package

At the command prompt, type in:


Finally, students need to install the the mpg123 library

Whilst still at the command prompt, type in:

Note: In order for the sorting hat script to work, students must launch idle as Super User (sudo) - without this, the students will not be able to communicate with the GPIO header via the Pibrella.

1. (If students haven't already done so) Double click on LXTerminal to start a command line

2. Type in the following at the command line to start the Python environment:


(Important! Make sure you add the ampersand '&' at the end)


3. Select File > New Window from the menu to start a text editor

4. Enter the code as follows (Note: Case is important)

while True:
# wait for the button to be pressed
while True:
while pibrella.input.a.is_high():
# Slight pause for dramatic effect
time.sleep(0.1)
randomgenerator()

Give your file a sensible name e.g. "sorting hat.py" (Note: Make sure you save  )

Important! Students MUST also copy the following audio files into the same folder as their python script:


I can't hear any sound from the speakers.