​How to create a 'guess the word' game in Python (Free python web tutorial).
Like this tutorial? Share it with your followers by clicking on the image below. 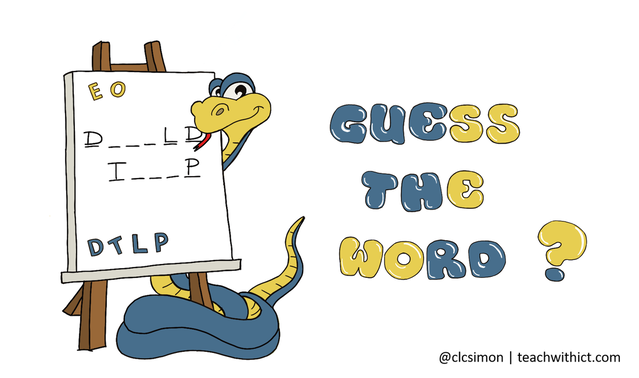 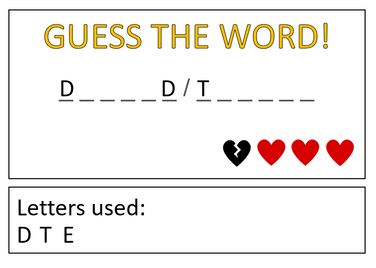 In this tutorial, you will learn how to create your very own 'guess the word' game using Python.
Part 1: Introducing the String Slicing

Before creating your guess the word game, let's explore some of the functions you will be using.

STEP 1
Let's start by writing a program to replace a  character at specific index in a string.

To replace a character with a given character at a specified index, you can use python string slicing as shown below:

Type in the following code in the code window (below):
Make sure you comment your code, using the hashtag (#), explaining what the code is doing.

​In our game, we need to replace each letter in our word or phrase into a dash '-' or 'underscore '_'.

Challenge 1
Modify the code above so that it changes the 3rd letter to an underscore '_'.


STEP 2
In order to change all the letters in our word or phrase, we are going to need a loop.
Type in the following code in the code window (above):
Problem! Can you see the problem with our code?
Because there are no spaces in between each of the hidden letters, we can't tell how many letters there are in our word!

Replace the last line in your code (above) with the following (make sure you put a space between the two speech marks " "):
Run your code again and ​comment your code, using the hashtag (#), explaining what the new code is doing.
Part 2: Creating a random name picker

To make our game more challenging, each time the player plays the game it will pick a new word at random from a list. Let's practice this by creating a random name picker.

STEP 1
Let's create a random name picker. This will form the basis of your 'guess the word' game.

Type in and run the following code:
Challenge:

Comment your code, using the hashtag (#), explaining what the code is doing and why the random generator is returning a value between 0 and 2 rather than 1 and 3.

e.g. if we were to run the following code:

The computer would return the name “Bob”


STEP 2
Replace the last line with the following new code:

Run the new script and explain what the new code does.

Finally, we need to add (concatenate) the word “Minion” at the beginning of our randomly selected name.

Replace the last line with the following:
Run the new script and explain what the new code does.

Add some more names to the list.
Part 3: Creating the 'guess the word' game.

You now have all the components you need to create your very own guess the word game. Enter the following sample code into the code window below.
Example Solutions

Guess the word is licenced under a Creative Commons Attribution 4.0 International License.