Explain that an algorithm is simply a sequence of steps for completing a task. Also explain that algorithms can be represented in many ways, the most commonly used being flow charts and pseudocode.

Follow this by going through an example on the board (see below). 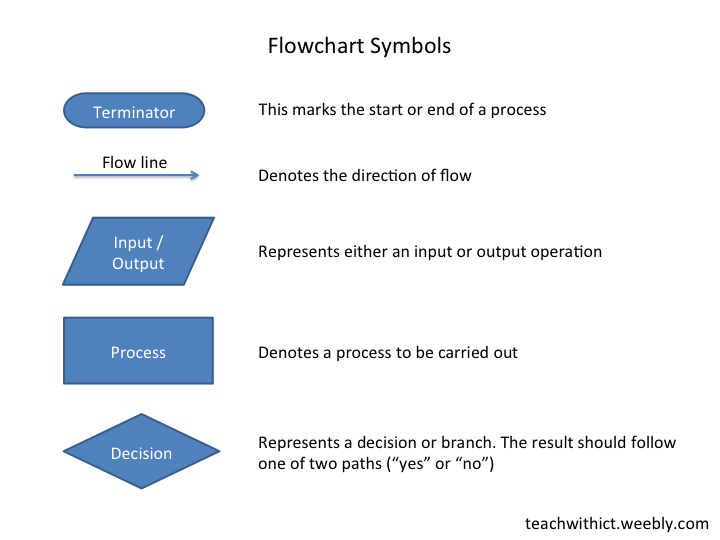 ​Next, display a set of the most commonly used flowchart symbols on the board and explain what they mean (see below). Challenge the students to give examples of how each symbol might be used – giving prompts where necessary. 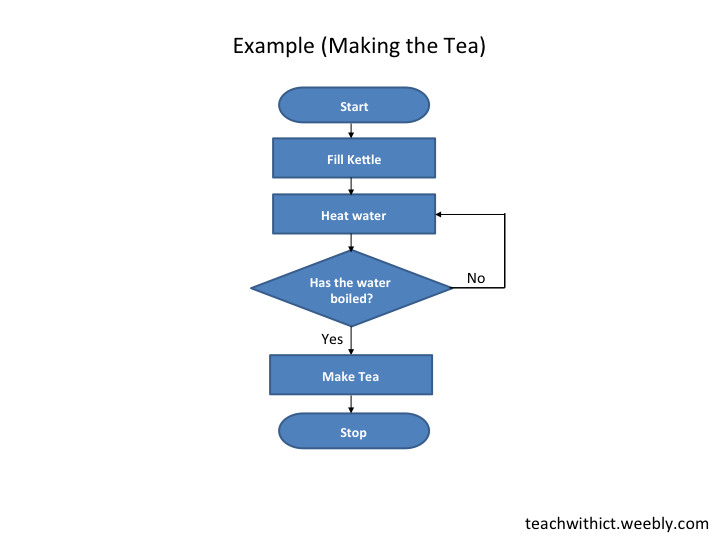 With input from the students, go through the solution to the second matching exercise - “going to school”. Next, ask students to suggest what daily routines are missing from the example.

Place students into small groups and ask them to improve the algorithm for getting up and going to school in the morning (in the form of a flowchart).

Tip: You can get the students to write down any algorithm (e.g. making the tea, tying a shoelace, making a jam sandwich etc.) however, I find, the more complex the algorithm, the easier it is to explain the need for sub-routines later in the lesson. The going to school algorithm is great for demonstrating this as you can have several sub-routines for brushing your teeth, taking a shower, making breakfast etc. Also, try to encourage your students to make their algorithms as detailed as possible - this will also help with explaining the need for sub-routines later.

Wait for the group to fill the whiteboard, at which point, stop them and ask the rest of the class to suggest how the solution could be simplified / cleaned up. This is where you introduce the flowchart symbol for sub-routines (see below).

Ask the students to suggest the possible benefits of using sub-routines and wait for answers such as “easier to understand” and “several people can work on the same algorithm at the same time”. Finish by asking the students to modify their solutions to include at least one sub-routine.

There are several ways in which you can introduce flowcharts. Here are some alternatives to the ones I suggested:

In this exercise, students are asked to create an algorithm from set commands to program their teacher (sandwich bot) to make a jam sandwich. Students must write a set of working instructions, using commands such as Pick Up and Put Down, which their teacher has to follow precisely in order to make a jam sandwich. This task can be easily adapted to incorporate flowcharts and is great for introducing algorithms (at any age)! To find out more, check out this lesson plan, courtesy of Phil Bagge, CAS Primary Master Teacher (@baggiepr): Jam Sandwich Algorithm (programming teacher bot)

This is a starter activity I use to introduce algorithms. Print and cut out the attached instructions for making a cup of tea. Instruct students to put the instructions in the correct order. The “Making the Tea” exercise has been doing the rounds for sometime. I remember doing it at college back in the early 90’s. What I find interesting is seeing all the different variations for such as simple task. Extension task: If your students are feeling really confident, you could challenge them to create a BS 6008 compliant algorithm for making the tea!

Here are a set of Flowchart tasks for simple activities (making tea, coffee, pizza, lasagna etc.) courtesy of David Barnard (via CAS). Includes a differentiated version of the making tea exercise. (Requires you to login to the CAS community - FREE)