Learn how to create a 'Harry Potter' style sorting hat with this free Python web tutorial.
Like this tutorial? Share it with your followers by clicking on the image below. 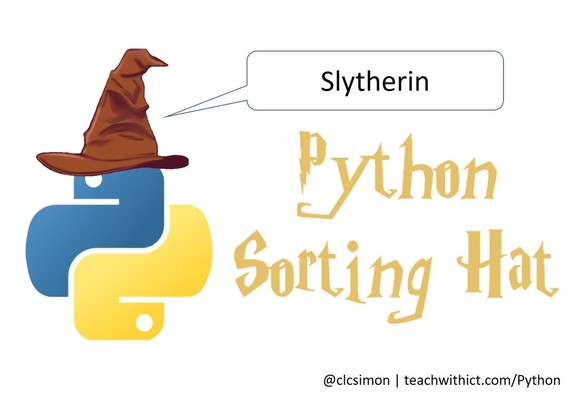 In this tutorial, you will learn how to create a Harry Potter style sorting hat using the tkinter GUI in Python.
The 'Sorting Hat' scene from Harry Potter and the philosopher's Stone:
Version 1 - Simple sorting hat

Let's first start with as simple version of the sorting hat.

What if we had 10 or 20 houses or we wanted to create a student name picker with up to 30 students? Can you see a problem with using an if/elif/else statement?"

There is a better way!

Instead of using multiple if/elif/else statements, we can use a list.
​​
STEP 1 - Importing the necessary libraries

Finally, enter the following code to select an item from the list at random:
Use the code window above to test your code.
Your finished code should look like this:
Resources:
You may also be interested in:
Licence: