Start the lesson by displaying the following binary joke on the board:

“There are 10 types of people in the world: Those who understand binary and those who don’t”

After a quick scan of the classroom to gage how many people get the joke, explain to the class that the punch line will be revealed at the end of the lesson.

Began by explaining that data in computers is stored and transmitted as a series of zeros and ones. Demonstrate this using the following activity from CS Unplugged called counting the dots: http://csunplugged.com/sites/default/files/activity_pdfs_full/unplugged-01-binary_numbers.pdf

Start by choosing 5 volunteers, and give each volunteer one of five cards (each with dots on one side and nothing on the other). See attached:

Next, ask the students how many dots would the next two cards have and why.

Ask the 5 volunteers to flip their cards over one at a time and, with input from the rest of class, explained what each card represented.

Follow this by asking the volunteers to make other numbers such as 6 (4-dot and 2-dot card) and 21 (16-dot, 4-dot and 1-dot cards). Then ask the students to flip over all their cards (so that all the dots are facing forward) and ask the rest of the class to calculate the total and explain how they worked it out.

Finally, challenge the volunteers to count from zero to 31 by flipping the cards in sequence.

For an example of how to deliver this activity, see the video below: 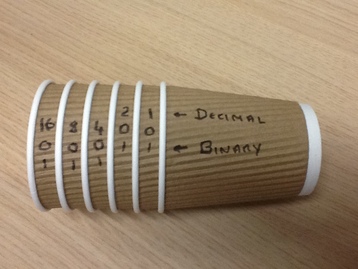 An idea picked up from Dan Aldred (@TeCoEd) http://www.tecoed.co.uk/downloading/counting-binary-with-cups
- Use coffee cups to aid students who struggle with the tasks.
Extension

Once students have completed the “Santa Code Cracking Challenge”, direct them to http://forums.cisco.com/CertCom/game/binary_game_page.htm and instruct them to play the CISCO Binary Game.

Display the following table (used in the previous task) and ask students what is wrong with it. Encourage answers such as “No capital letters” or “No full stops”. Ask students to suggest how they could improve the table.

Download File
Explain to students that with 7-bits, the computer can store up-to 255 characters. Remind students of your claim at the start of the lesson about counting up to a thousand on two hands. Explain that with 10-bits (Binary Digits) we can count up to 1023.