A programming challenge for students who don't like History, Geography, MFL or R.E.
Like this tutorial? Share it with your followers by clicking on the image below. 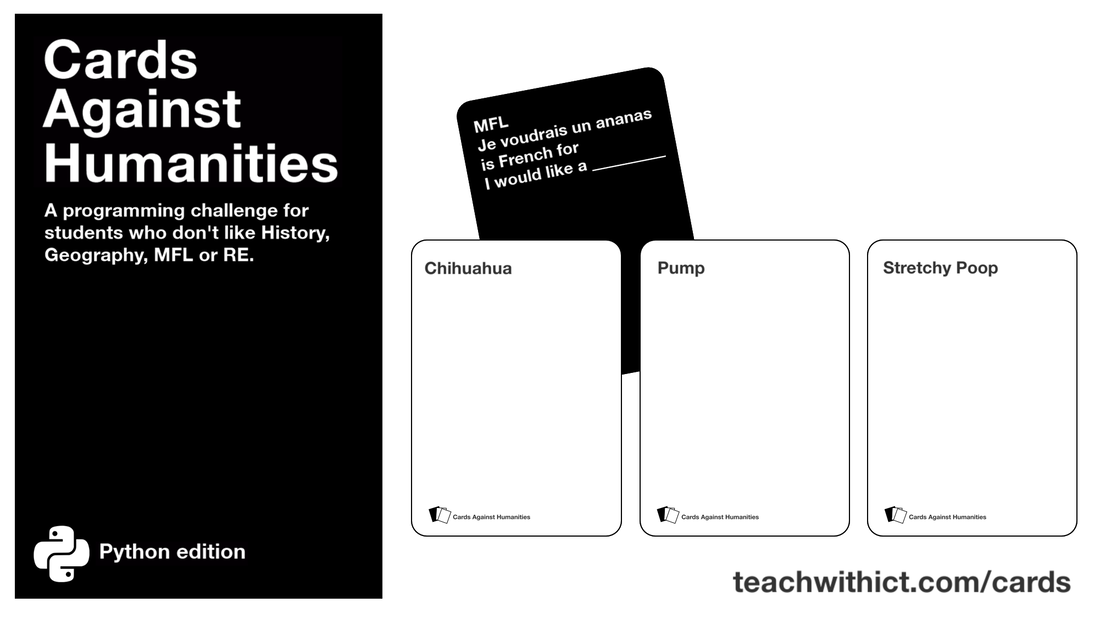 Cards Against Humanities is a phrasal template word game, where one player prompts other players for a list of words to substitute blanks in a question or phrase before reading out the completed phrase or question aloud.

We start with a question or phrase containing one or more blanked out words. Here’s a basic example:

Rumble in the Toilet.
Introduction

In this tutorial, you will learn how to code a “Cards Against Humanities” game in Python. The game will work by prompting the user to enter some words (e.g. person’s name, noun, adjective, place, object etc.) and substitute these with blanks in a quote from History, phrase in French or Spanish, or Geography question etc.

There are several ways to create a Cards Against Humanities game in Python. In our version, the program will pick a phrase or question at random from a list of humanities subjects (History, Geography, Moder Foreign Languages or Religous Studies). However, before we start coding our “Ultimate Cards Against Humanities” game, let’s start with a simple version:

Type in and run the following code:
Use the code window (above) to test your code.
Challenge:
Example:
Activity 2 – Cards Against (Version 2)

In the next example, you are going to create a text file containing several questions or phrases (containing blanks). Just like the previous example, the program will ask the user to enter one or several nouns, verbs, adjectives etc. but this time will pick a question or phrase at random from a text file.

Before you create your text file, let's first explore the ‘string replace method’.

1. To understand how the .replace() method works, try the following code:
Use the code window (above) to test your code.
In the above example, the line ‘string = string.replace(“is”, “was”) looks for the word “is” in the sentence and replaces it with the word “was”. We will be using the .replace() method to replace the blank(s) in our Cards Against Humanities game with the word(s) input by the user.

Next, we need to create a text file for our Cards Against Humanities game, for the purpose of this example, we will call the file 'cards.txt'.

Challenge
Create a list of historical quotes, geography questions or phrases in French/Spanish etc. and store each one on a different line – Type in the word ‘blank’ for the word you want to be replaced, for example:
Use the code window (above) to test your code.
Step 3. Writing the code

1. Enter the following code (make sure that you read the comments explaining what the code is doing):
Challenge: hint: print(card)

Run the sample code below, making sure that you read the comments so that you understand how the code works. Tinker with the code / customise the text files to make the program your own.
Keywords: